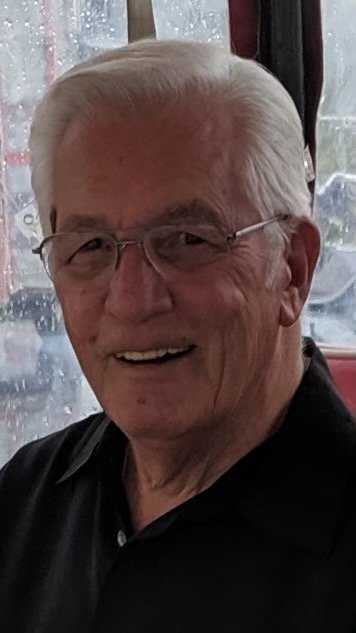 Please share a memory of Andrew to include in a keepsake book for family and friends.
View Tribute Book

Born in Paterson, the eldest son of Miguel and Carmella Rodriguez and brother of beloved Salvatore, Andy attended Eastside High School and from 1951 to 1956 served in the United States Navy. In 1960 he received his BS from St. John’s University and began his career as a registered pharmacist, eventually becoming co-owner of De Boer’s Pharmacy in Paterson. He retired in 2005.

In 1959, Andrew and Diana were married at St. Michael’s church.  During the next 61 years they shared a special relationship as they built a wonderful life together. His love and devotion was everlasting and grew stronger through the years. Together they raised a great family and that was always the most important part of his life.  Holidays and Sunday dinners with "My Familia" were the best.

Andy was for many years an active parishioner of Blessed Sacrament Church in Paterson. During his early years he was active at the bazaar, sung in talent shows as part of “The Haircuts,” and participated in the Good Timers club, where he made many beautiful friendships. He enjoyed travel and his hobbies included card games, Scrabble, movies, trivia, lottery scratch-offs, and bocce. He was always the first on the dance floor, dressed impeccably, without a hair out of place, which earned him the nickname of “Mr. Suave.”

When he moved to Barnegat, his favorite days were filled with visits from his adoring children and grandchildren. He loved to tell them stories, play “May- I” and bingo around the dining room table, take them crabbing, and go to the arcade to show his skill at the games. He also loved spending time with his new neighbors on the bocce court, where he and his “partner” Diana participated in tournaments.

Survivors include his beloved wife Diana (nee Speranza); children Rosemary Logue of Flanders and husband Ron, Andrew of Paterson, Diane Dolecki of Stroudsburg, PA, and husband Rick, and Christine Coppola of Verona and husband Rob; and eight grandchildren: Kevin, Kyle, Dana, Shane, Gabriella, Robert, Christopher, and Nicholas, who all affectionately knew him as Poppy. He was a loved man by many, including nieces, nephews, and countless close friends who will miss him dearly.

In lieu of flowers the family suggests that memorial donations in Andy’s name be made to St. Jude Childrens Hospital or The Salesians Sisters of North Haledon.

All are invited to the Funeral Liturgy at Holy Angels Church on 465 Main St. in Little Falls on Wednesday, December 2, at 9:30 am. Viewing and entombment are private.

Look inside to read what others have shared
Family and friends are coming together online to create a special keepsake. Every memory left on the online obituary will be automatically included in this book.
View Tribute Book

Share Your Memory of
Andrew
Upload Your Memory View All Memories
Be the first to upload a memory!
Share A Memory
Plant a Tree